Lady Xenia, was her name. A wicked specimen of the spices females. This exact one was located in Stuttgart at www.arachne.de . Thin, and normal tall, piercing shining eyes, and a soft laughter. Is it really expected that we should be able to resist such creatures? We talked a little and she laughed with a poorly hidden

tone. I should have understood it already then, but I stayed.

She cuffs my hands to a spreader bar hanging from the ceiling, and places another one between my ankles. Standing right up close to me, she plays with my nipples. I know it, there is no way out for me here now. She blindfolds me, and tells me I got to earn the right to see. Then she inspects the three main areas of me, that she would like to torture, balls, ass and nipples. And she has some cruel nails, I tell you.

She places me over a table. Legs on the floor, still spread. And she cuffs my arms together, so I can not escape. She tells me she will make my ass warm and hot. Already under her spell, I whisper softly to her, thank You Mistress. She liked that. She starts out slow, figuring me out. Making me tell her how the ass reacts to the

. Due to the spell she has me in, the

feels just nice, could stand there for hours, for her. I tell her that it is so lovely to feel her force. She likes me saying that, and increases the force.

She whispers to me, that I am a captive in her prison, and now she is gone cane me. And I can earn the right to see again. She gives me one slap with the cane, and I have to say a number. Of course, she made a soft slap, so I would say a high number. I suggested 50, which she was seemed pleased to hear. She caned me, I counted and thanked her. And what a precision she had, the blows came right on the same spot. Starting to wonder at once, if I had been to big mouthed.

At 25 she changed from a fiberglass cane to a wooden one. It hurt, take my word for it, it hurt. And slowly but surely we reached 50. And my ass was on fire. She whispers softly again, asking me if I could take 5 more, just for her. As I said, I am weak. She had me under her power, making the only answer I could think of was: yes, please, Mistress. I think looking back at it, it was what she wanted to hear. Clue no one, that it was the right answer, was the blindfold got of. She was then standing before me, dressed in high heels sandals and a short latex miniskirt. I have seldom seen more delicious breast as she had. It was probably the worst torture of the entire time, not being able to touch, kiss and lick them.

She places me standing on a St Catherine wheel. Legs secured, arms secured. And she attacks my nipples again. Those

nails. And clamps. And she also had a finger glove with spikes. It hurt, no question about it, it was painful. And she looked at me and laughed. She tied my balls up, and secured the other end to the bottom of the wheel, tightly. And when she was down there, her nails attacked my sac. Digging in deeply. I screamed in pain. Back up and down between the nipples and the sac. It removed the last doubt in my mind, I am convinced she is a sadist, no question more about that.

She fetches then some weights. 1kg, I think it was. Attaches a rod to the rope around my balls, and let the weight dingle under me. The she lifts the weight, and drops it, again and again. What am a guy to do, except softly thank her for every time. I was getting dizzy in a good way, and she was smiling nicely, and had her continuous

laughter. Asking me if I liked being held in her prison. Yes I said.

The she releases my arms and feet, and asks me to lay down on the floor. I try to comply, only to figure out that my balls was still tied to the St Catherine wheel. Ouch! She claimed she was

that she forgot to release me, though I don’t believe her a second. Well, eventually I am laying on the floor on my back. Arms and legs are again cuffed to spreader bars. Clamps on my nipples, and she decides it is time for some trampling. Or more precisely, digging her stiletto heel down into my clamped nipple. I whimper in pain, which she understands as a plead, “Please pierce my nipples Mistress”.

Luck would have it, that piercing was her next step anyway. Sitting over my stomach, she tells me, that she has two different kind of needles, some 22g that is loooong, and some 18G that is short. And she decided 3 of each in each of my nipples would be nice, before more trampling. Knowing that it is no way out, I whisper softy, thank You mistress, as she tells me this. With precision and a steady hand, she presses them through my skin. One by one. She even is so kind that she lets me choose, if I want the pink or yellow on as the first needle in the second nipple.

When I was pieced up, there is a nock on the door, and another lady comes in. The mistress graciously allows me a short break, while she have a smoke. And her preferred seat to have that smoke, happens to be my face. And she makes sure that she covers my mouth and nose. Telling me in a soft voice, that I am fully in her power. Her and the other lady start to chat a bit, but as it happens, she felt that one of her arms was bored. A

to the rescue. I have never had my nipples paddled before, but with needles in them, it made for an interesting sensation.

made me probably wiggle to much, at least her soft voice tells me to lay still, and if she feels anything else but my

mouth under her, she would kill me. I tried the best I could to comply. She raises from me, using her heel on my nipples again. It hurt badly. Then as the other lady in there, also had a go at me. As this resulted in me wiggling on the floor, she placed her shoe over my throat, pressing down. Telling me how helpless I am, and I better take it. I whisper: thank you mistress.

The other lady excuses her self, and I am stuck in Lady Xenias prison without witnesses. Ouuuuuuuuuch, bad fortune. She walks over to the other side of the room, fetching some more toys of torture. The finger glove with pins and a Wartenburger wheel. And she is thoughtful of my position, making sure to give me some kicks to the balls both time she passes by me. Two steps from her later, she places her heel hard down on my nipples. I could not help it, it made me shiver hard. To much for her, I believe, as she place her high heeled sandal over my throat again, pushing down, telling me that it is no way out. She bows down over my stomach again, face close to mine, and places her hands over my mouth and nose, telling me, it is all so easy for her.

Again, I am given the gift of her wonderful butt sitting over my face. Her soft seductive voice tells me if I bite her, I am dead. Plain and simple. She even gives me the advice of taking a deep breath, before she almost smothers me to beyond. Now this would have been like dying and gone to heaven, except for she again starts on my nipples. The finger glove with pins pressing down hard. She even tells me that this is cruel torture. I believe her. My reactions elsewhere was obviously to her pleasure, as she before I pass out, gives me the gift of air.

And again she shows her companionate side, when she start with the Warteburger wheel. I can chose whether she should roll it slowly or quickly over my skin. Lightly would maybe been the preferred option here, but that was not for me to decide. I little of both was the result, as I didn’t manage to make up my mind quick enough. And it put me right into a state of heavy shivering, with an extremely foolish smile on my face. It was enough, plain and simple. And I loved every second of it. 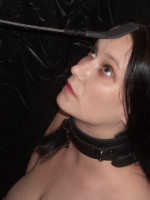